In Medieval times in Britain on Christmas Eve a porridge made with oats, to which was added dried fruits, spices and honey was eaten.  This was the origin of Christmas Pudding.

The spices used were a reminder of the Wise Men – the 3 Kings that came from the East.

By the 16th Century as ovens became more in use, butter and eggs were added and wheat flour replaced the oats and this became the Christmas cake.

We never had this cake at home until sometime in the late 1970s when my mother tried out this recipe from a magazine.

It is a very moist cake and reminiscent of Christmas pudding.

Because it is so moist it will only keep for about 2 months but it is one that can be made really at the last minute and one year I made it just 4 days before Christmas.

However if you want to add marzipan & icing then you should make it about 2- 3 weeks in advance, to give time for this to be done. 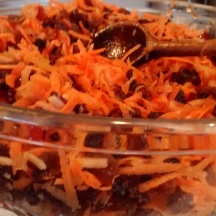 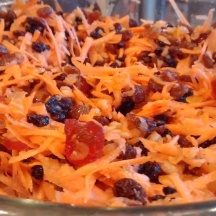 Put all the fruit, carrots, rum & tea into large bowl,  mix and leave for 15 minutes.

In another  large bowl, cream the margarine and sugar, beat in the treacle and eggs.

Mix all the dry ingredients together & fold them in using a large metal spoon.

Fold in the fruit mix using a large metal spoon.

This amount will make one of the following cake sizes:

8” round plus a small loaf.

Grease and line the cake tin

Put all the cake mixture into the tin to fill the shape and smooth the top.

8” round plus a small loaf  (I have never tried this – will suspect around 2 hours).

The above are guides as it does depend on your oven – you need to check earlier. 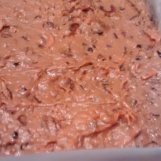 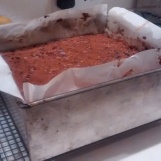 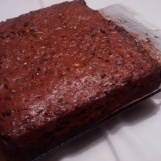 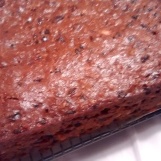 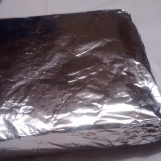 Leave to cool completely in the tin.

Wrap in several layers of foil to store.

It depends on who is coming and whether there are  lots of marzipan & icing lovers on how much I decorate the cake.

Sometimes I just dust the top with icing sugar.

Sometimes I just have marzipan on the top dusted with icing sugar  – but lately I have had marzipan & Royal Icing lovers coming so have decorated the top & used a cake frill around the sides.

Marzipan is a paste made from ground almonds, honey or sugar & egg white.

It is thought that it originated in China and then came to the Middle East and from there it came to some parts of Western Europe through Spain & Portugal and to Eastern Europe from Turkey.

The old name in English is marchpane and the Polish is marcepan and the name appears to come from Italy where it was known as panis martius or marzapane  which means March Bread – but why March Bread – I am not sure!

It was certainly being used in the 15th century in Europe.

Preparing the cake for marzipan

Brush the surface of the cake with warmed apricot jam.

I usually make my own marzipan but of course you can buy ready made marzipan.

If you are going to ice the cake as well then allow 1 week for the marzipan to harden so the nut oils do not discolour the icing (If you know it will be eaten quickly this is not really a problem).

I usually do a 3 egg white amount of marzipan

In a bowl mix the ground almond, icing sugar and caster sugar.

Add the egg white mixture to the dry ingredients and mix together with a wooden spoon until you get a unified mass of marzipan.

You want a mixture that you can roll out – you may have to add more icing sugar to achieve this.

You need to dust a board with icing sugar to roll out the marzipan easily.

This icing uses egg whites and give a firm icing good for doing fancy decorations (which I do not do!).

Using sugar to make icing  was a sign of wealth & power and this became very popular in Victorian times.

It was used on Queen Victoria’s wedding cake in 1840 and so got the name Royal.

You can ice right up to the last minute but it does take around a week for the icing to fully harden.

If just doing the top of the cake I would use 2 egg whites.

You can buy powdered Royal icing which is icing sugar & dried egg white and you just add water or water & lemon juice. (I have used it but have used fresh egg whites as well!)

Lightly beat the egg whites and then mix in the lemon juice.

Add the icing sugar a few tablespoons at a time and keep mixing until you have have the icing thick enough to work with.

Spread the icing on top of the marzipan using a small spatula & have a mug of hot water at hand to dip the spatula in.

I do not do any fancy icing – just random peaks – also achieved using a spatula. 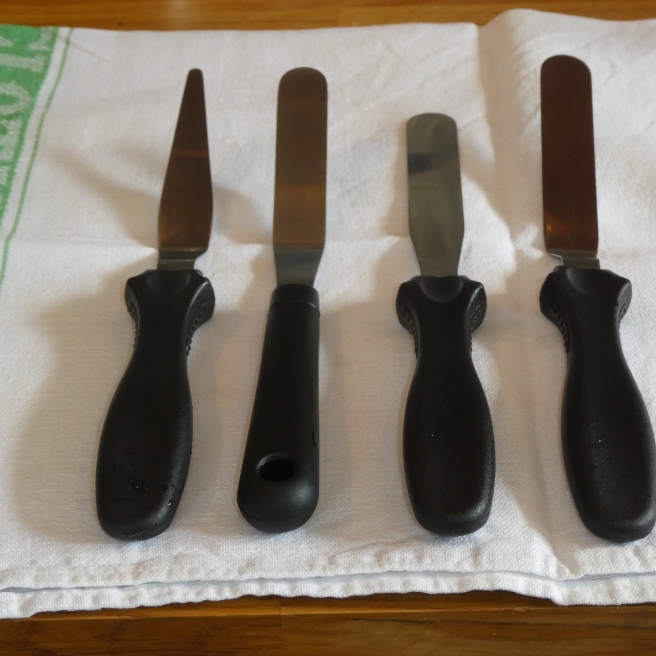 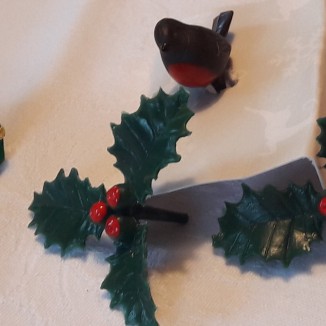 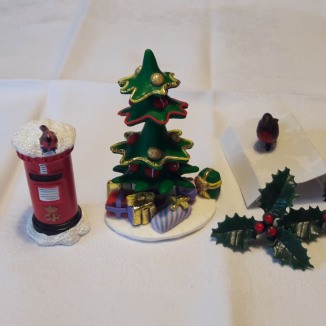 One thought on “Mama’s Never Too Late Christmas Cake”