In many recipe books and often on menus in restaurants you can see dishes described as po staropolsku which means in an Old Polish Style.

What exactly does that mean?

I have found this a hard question to answer as there two sides to its meaning, one is about hospitality and the other is the ingredients.

When restaurants use  po staropolsku they are trying to evoke connections to noblemen & democracy with the chivalry & hospitality that was found in the manor houses in Poland, particularly from the 16th to the 18th century.  They are trying to make you think of the quality of the food and the surroundings.

The Poles are thought to be a very hospitable nation and a very famous saying in Poland is  – “Gość w dom, Bóg w dom”  which means  when you have a guest in your house, you have God in your house, meaning treat your guests to the very best.

“Lepiej gościa zabić, niż nie nakarmić “which means – it is better to kill a guest rather than not feed them well.

I noted this quote many months ago – today when I tried to find the reference in the book, which is a large tome of over 900 pages, I could not find it – when I do in the future I will come back and add  it here. 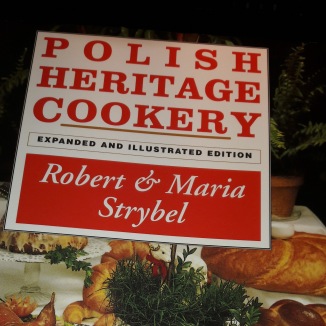 Some of my reference cookery books.

Many old recipes can be classed as po staropolsku – especially if they contain:

Dishes included various soups & especially Sour Soups (I will write about these in the future), honey cakes, pierogi, gołąbki, bigos and dishes with meat & dried fruits.

Some of my favourite dishes in the old Polish style combine pork with prunes, often with honey.  I love the flavour of the meat with all this sweetness added to it.

I am going to write up 3 different recipes  – the first in this post – the others to follow shortly.

The best pork to use is a boneless joint of pork loin which has also had the skin removed, but if you cannot get this then leg of pork is good as well.

Note  You can always scale up this recipe for a larger piece of pork.

I have found that the best prunes are lovely plump ones from Agen in France but the ones that are more dried are also good, you just have to soak them for longer before you can take out the stones.

You can of course use ready stoned prunes – I just prefer the ones with stones in  – though they are increasingly harder to find – I can get them from a Nut & Dried Fruit stall in Leeds Kirkgate Market.

However in January 2017 there were no prunes with stones on the market. The lady on the stall said this was because of a very poor harvest – so I have had to use stoned prunes to try out the recipes for the photographs & this post.

At least an hour before you want to roast the pork, put the prunes in a small bowl and pour boiling water over the prunes to cover them.

Leave them to plump up and then remove the stones from the prunes.

Retain the liquid from the soaking as this will be needed.

Place the pork in a roasting tin and rub some coarse salt onto the fat on the top.

Put the prunes under and around the pork with the water from the soaking & extra to cover the bottom of the roasting tin and place in the oven.

Roast the pork – about 1 ¼ hours should be enough for this weight, baste the meat with the liquid from the prunes and juices a couple of times, adding extra water if needed. 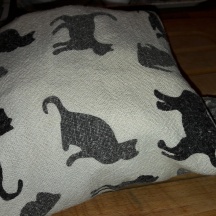 When the meat is ready, take out of the oven, cover with foil and then a tea towel and leave it to rest.

Add the honey to the prunes and juices, stir these together over some heat in the roasting pan, you may need to add some more water.

Slice the pork and place on a serving dish and place the prune mixture around the pork to serve. 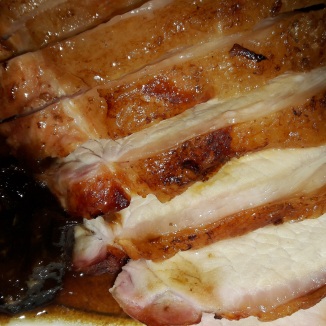 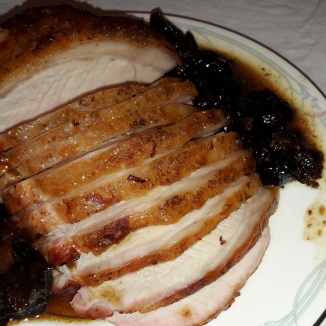 4 thoughts on “Po staropolsku – in an Old Polish Style”