Having written about liver in general in Lovely Liver!  I thought I would also look at chicken livers in particular.

These would have featured in my shopping on a regular basic many years ago but have been somewhat neglected in recent years – this will now change!

I could not find any fresh chicken livers in my local shops but did find tubs of frozen chicken liver – they contain around 225g per tub and the cost was very reasonable. 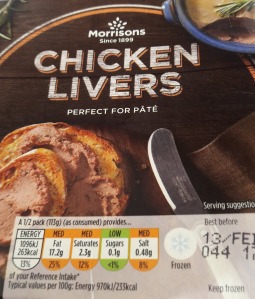 All my recipe books say to soak the livers for at least 1 hour – to help remove any bitterness.

I do not remember doing this in the past but decided to try this out – they tasted lovely – not sure how much was due to the soaking.

Put the chicken livers in a bowl with the milk and leave for at least an hour.

Drain them off and pat them dry and dredge them in the flour.

Cut the onions in half and cut them into thin slices.

Fry the onion gently in some of the butter until they are golden brown.

In a separate pan fry the floured chicken livers on all sides for 2-3 minutes.

Sprinkle them with the Italian seasoning, mix well and cook for a further few minutes.

Add the livers to the onions and mix well.

Sprinkle with salt and pepper. 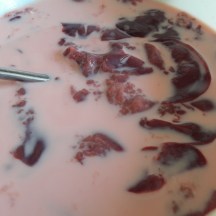 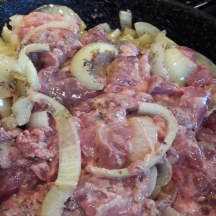 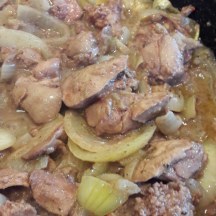 These are best served with something quite plain such as boiled rice or crusty rolls and maybe a tomato salad.

2 to 3 tablespoons of sunflower oil

I have described each as a separate stage but you can  do these at the same time.

Cut the onions into half and then slice into thin half circles.

In one frying pan,  fry the onions gently in 3 tablespoons of butter until they are golden.

Peel and core the apples and cut them into quarters.

In another frying pan, melt the 1 tablespoon of butter and heat the apples gently on all sides. 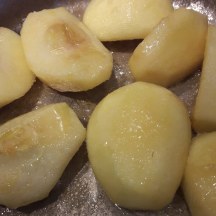 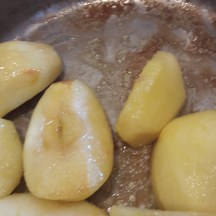 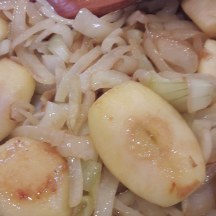 Add the tablespoon of sugar and continue to cook on a low heat for 2-3 minutes until the sugar starts to caramelise.

Add the apples to the onions and mix together.

In a seperate pan melt 2 tablespoons of butter.

Fry the chicken livers in the butter, stirring and turning them for around 3-4  minutes.

Srpinkle with salt and pepper.

Mix the livers with the apples and onions. 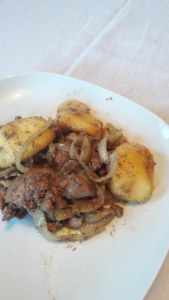