Smetana – Soured Cream – must be one of the most used salad dressings in Poland.

Soured cream is used  just on its own and sometimes if it is thick or because they like it that way people will add lemon juice to make it more runny.

I am going to write about the three classic salads which will have soured cream on them.

Legend has it that this salad was beloved by Queen Bona, the Italian princess, who married King Zygmunt 1 in the early part of the 16th Century.

She is famous for bringing her chefs and a variety of vegetables to Poland  and many vegetables names in Polish have Italian roots.

The word mizeria comes from the Latin meaning misery.  It is said that this salad made the Queen homesick for Italy.  I can understand the cucumber – not sure about the soured cream – but that is the story.

It certainly is a delicious cooling salad for a hot day.

I was talking with one of my Polish friends earlier last week and I said that I was going to write about mizeria and she said “Oh there were 20 people for dinner yesterday and I made a huge bowl of mizeria – it was delicious and it  was all eaten!”

It is the salad that everyone loves to make in the summer and it is so easy.

Dill or chives as a garnish.

Take a cucumber and peel off the skin. If the skin is thin then sometimes I do not peel it all off,  just stripes so that you have a nice pattern later of dark and pale green. 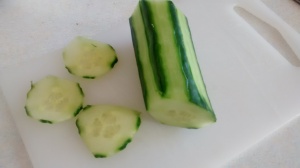 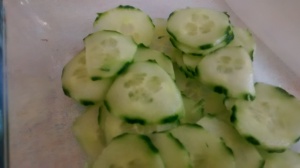 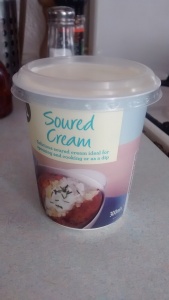 Add several spoonfuls of soured cream to the cucumber and mix them together, you want to coat most of the slices.

Sprinkle with a garnish of chopped dill or chives if desired and serve.

This is delicious with Polish style smoked meats and sausage and also with  hot roast meats as a lovely contrast.

This is best made with  young fresh cucumbers in summer.  However now that you can get greenhouse grown cucumbers all year round I sometimes find that they are a bit old and woody,  if this is the case I would remove the seed area – this is best done by cutting the cucumber lengthwise in two and removing the seeds by pulling a teaspoon down the seedy middle. Then you can slice the cucumber as before.

Some cooks salt the sliced cucumber and leave this for about half an hour and then discard the liquid before adding the soured cream.   I do not usually do this unless I am making it for serving at a much later time.

Chives or Spring onions to garnish.

Prepare the radishes by removing the hairy roots and stalks.

Put the radish slices in a bowl and add several tablespoons of soured cream (thinned with lemon juice it desired).

Garnish with chives or the green part of spring onions, finely chopped. 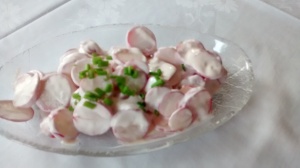 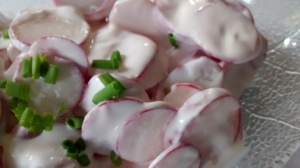 I love the way the radish skin colour seeps into the soured cream after a while and makes it pale pink.

This is the most simple salad you can make – just use lettuce leaves pulled off from the head of lettuce, wash and dry them using a tea towel or a salad spinner  and add several tablespoons of soured cream (thinned with lemon juice it desired) and mix them together.

Garnish with a few chives if you have them and serve. 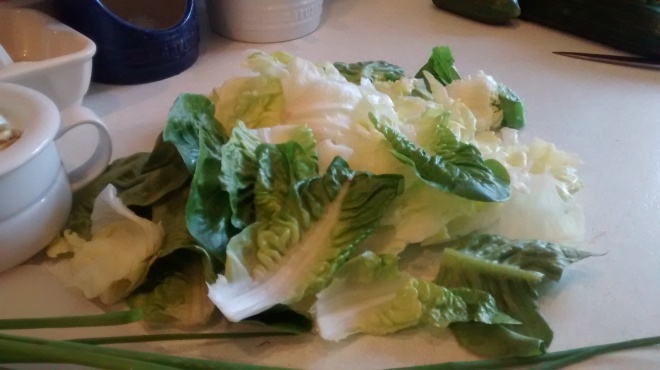 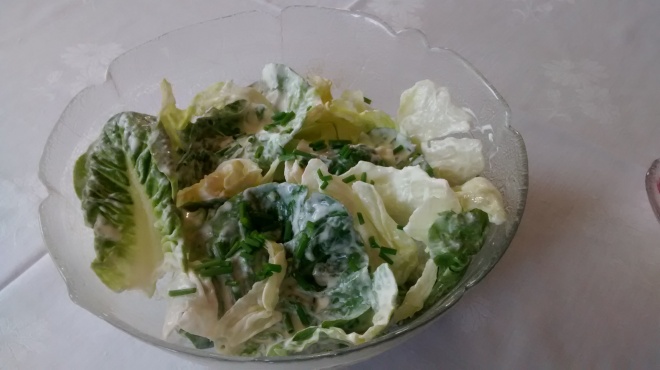 40 years of not following recipes has led to this