I have written about Polish pea soup which is usually made with yellow split peas.

My mother could not always get yellow split peas and sometimes used Marrow fat peas.

My Dutch friend in The Netherlands often talks about Dutch pea soup which is made using Marrow fat peas or green split peas.

The Dutch soup tends to be made as a much thicker soup and pork, such as a chop or pigs’ trotters, is often used and also as smoked bacon or ham; potatoes are often added as well.

I have made my soup more on the Polish thinner side and used a chunk of smoked  Polish bacon. – You can use smoked gammon or smoked bacon – use it in large pieces – cut it up after it has been cooked in the soup.

400g piece of smoked Polish bacon (boczek in Polish, which means side)

2 litres of vegetable stock (can be from a cube or powder – I often use Marigold powder). 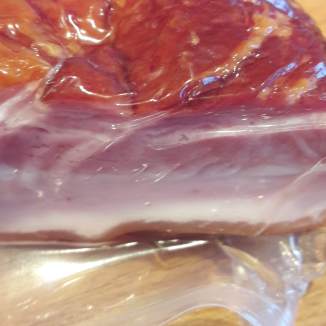 Put the marrow fat peas into a large bowl with around 800ml of boiling water poured over them  and leave overnight.

Some instructions say to add bicarbonate of soda to the peas – I prefer not to.

The following morning, drain and rinse the rehydrated peas.

I have started using my large slow cooker to make soups – you can also use a large stock pot and once brought to the boil, leave it to simmer on the stove or in a low oven.

Place all the ingredients into the pot and switch on and leave to cook for 4 – 5 hours until the peas have cooked to a soft pulp.

You might want to add some boiling water and stir the soup if it has become too thick.

Remove the piece of bacon and chop or shred the meat, then put it all back into the soup, stir and heat for a few minutes before serving.

You can use the cooked meat on for example in sandwiches and only put part of it back into the soup.

Served here with scalded rye bread on tea plates by Taylor and Kent of Longton.

The split peas do not have to be soaked overnight, just use then as they are.

So this is much quicker to make as there is no overnight soaking. 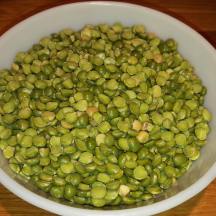 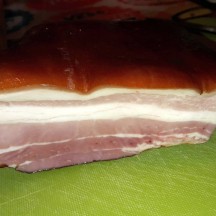 You can add some chopped chives or the green part of spring onions before serving.

I have found that these soups freeze very well – portionned up into tubs for future use. 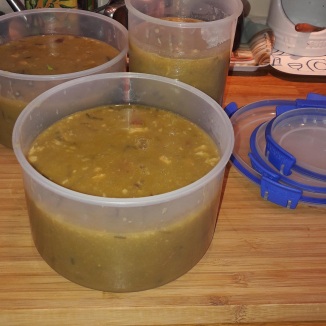