I have been doing some research into cooking in Victorian England and came across this recipe, which is based loosely on an apple pudding in Mrs Beeton’s Book of Household Management  published in 1861.

Eating apples are used in this recipes rather than tart cooking apples.

Although not a Polish Apple Cake, I think it would go down very well if served with a cup of tea in Poland. 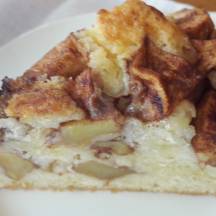 As well as any cookery books and magazines, I have notes and cuttings  from various sources.  Ever so often I look through these for inspiration and think “Yes, I must try that!”.

Here is a recipe for a salad that I jotted down when visiting one of my cousins in Białystok.