I wrote a long post on pierogi and uszka   over two years ago and this has lots of details on Polish pasta.

This post is an update on how to make uszka in advance and open freeze them.

Uszka –  means ‘little ears’ and traditionally  mushroom uszka are made for Wigila – the Christmas Eve meal  to serve either on their own with butter or floating in barszcz (clear beetroot soup).

I usually make around 250 to 300 uszka on the morning of Christmas Eve.

Last Chritmas I was going to be taking the uszka to my sister’s to cook there and also needed some on another day to cook at home.

In Poland these will have been made with just dried mushrooms, here in England my mother made them with fresh mushrooms with the addition of dried mushrooms when she could get them.  I like them like this the best.

250g mushrooms – older open ones are better than button mushrooms.

1 to 2 tablespoons of home-made dried breadcrumbs

Butter to fry the mushrooms

Pour a small amount of boiling water into the dried mushrooms and leave these overnight.

You can remove the stalks from the older fresh mushrooms as these tend to be ‘woody’ and then cut the caps into thin slices.

Chop the onion into small pieces.

Fry the mushrooms and onions together in the butter.

Chop the reconstituted dried mushroom (You can save the liquor for other recipes) and add these to the mixture and heat them together for a few minutes more.

It does depend on the mushrooms and the way they are fried as to how much liquid is produced, if you get a lot, then let them simmer gently to evaporate as much as possible or strain some of this excess off (again you can use this liquor in soups or sauces).

Allow the mixture to cool.

The mixture then needs to be minced which used to take me a long time and much effort.  I now use a hand blender which works really well indeed.

To the minced mixture add the egg yolk and enough breadcrumbs to make a stiff filling.

You can divide up the mixture into 3 or 4 portions and freeze these in plastic bags or tubs to use at a later date. 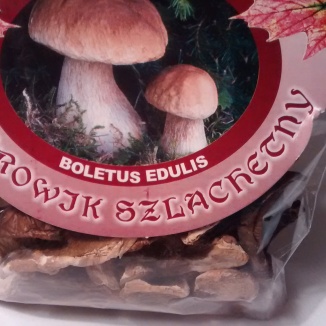 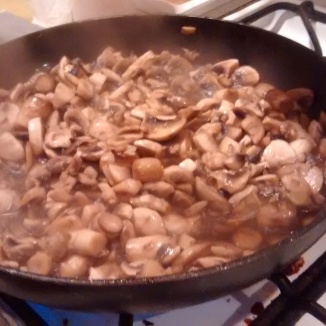 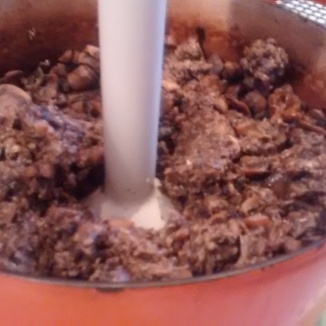 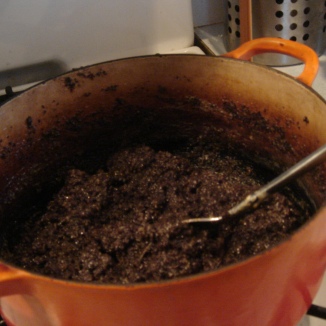 The dough is made from flour, egg yolks and water and I have  seen many variations of the recipe.  The following is my mother’s and I think it is the best I have ever used and tasted.

She never used whole eggs, just the yolks and this gives a dough which is soft and not tough and can be easily rolled out.

My mother originally used plain flour and added a tablespoon or two of fine semolina but now that strong flour or even pasta flour is readily available this is what I use the most.

Flour does vary and it is possible to add more flour to the dough as you are mixing it but you cannot add more liquid if it is too dry!

As you mix the ingredients in the first few minutes you should be able to tell if it will be too dry and you can add some more water initially but once it is all mixed together you cannot – if it goes wrong – just start again!

The quantities that I have given work well and but you should allow for extra flour if needed.

Depending on how thinly you roll out the dough, this amount should make around 70 uszka.

In a jug or bowl mix together the water, oil and the yolk.

Put the flour and salt into a large bowl and make a well in the centre.

Pour in the liquid from the jug and initially use a knife to mix this into the flour and then use your hands to mix the liquid and flour to get a ball of dough.

Turn this out onto a floured board and knead the dough for a few minutes until you have a smooth ball.

Cut the dough into quarters.

On a floured board roll out a quarter at a time until you have a sheet of thinly rolled dough.

Now prepare a large tray and cover it with a clean tea towel and sprinkle this with flour.

Have a large surface such as a tray covered with a cotton or linen cloth which has been lightly floured ready  and place the sealed uszka on this until they are all made, do not let then touch each other.

I usually make the uszka from squares of dough, about 4cm square, which are folded.

This time,  I made the shape in a slightly different way – so that I got a much more uniform shape and size.

The excess dough can be re-mixed and rolled out again.

Around a small teaspoon of filling is put on  each circle and then they are folded over and the edges pinched together to make a good seal.

The two ends are the brought together and pinched to make a round “ear” shape.

You learn from experience how much filling to put in as too much will make it hard to seal them and if not properly sealed they will burst on boiling.  Do not worry if you have a few mishaps – it still happens to me even with experience – it is hard to salvage one that has gone wrong – just accept that there will be a few that you do not cook.

As you are making them place them on the floured cloth. 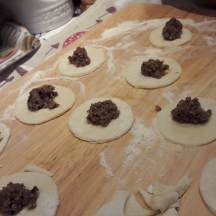 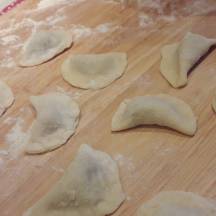 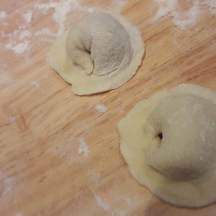 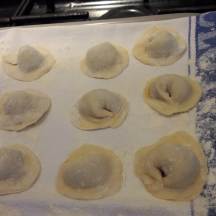 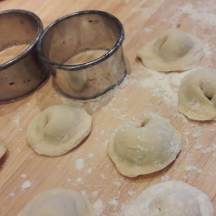 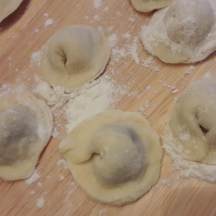 You need to have a fairly empty freezer to do this

If you have a extra chill button on you freezer, switch that on.

You will need around 3 baking trays – sprinkle flour on these.

Place  the uszka apart on floured baking trays so they are not touching and place the trays in the freezer for several hours – or even overnight – making sure the trays do not squash each other. 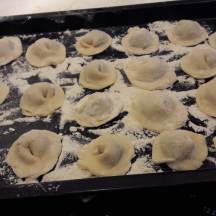 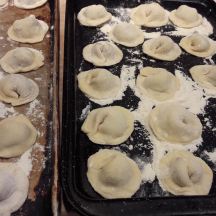 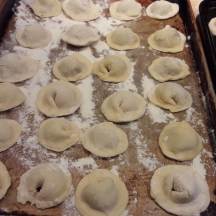 Once they are frozen, pack the uszka into boxes.

Cook them  straight from frozen by dropping them individually straight into boiling salted water – 8 to 10 at a time.

As they cook they will float to the surface, let them boil for 2 to 3 minutes and then remove them with a slotted or perforated spoon and put into a colander above a pan for a few seconds to drain and serve.  Continue boiling batches in the same water.

Uszka are served with melted butter or they can be served floating in a clear soup such as rosól – clear chicken soup or in barszcz – beetroot soup. 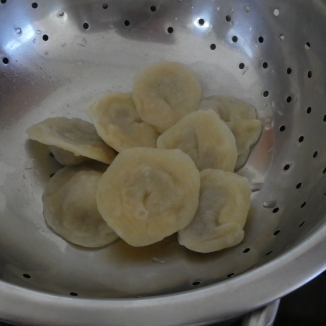 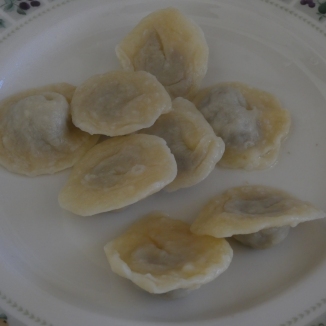 The convention is to serve three or five uszka in each dish. 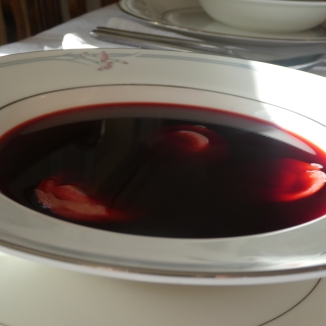 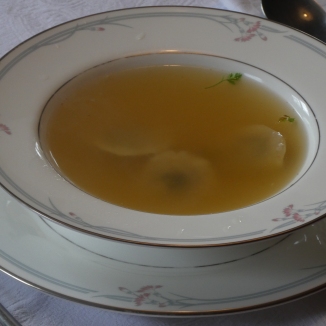 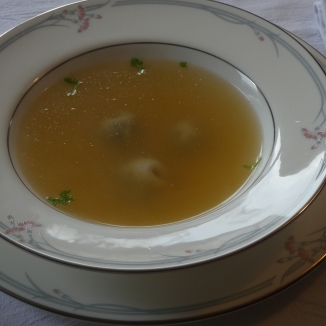 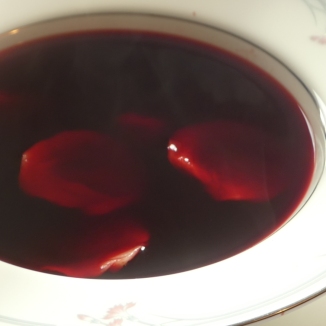 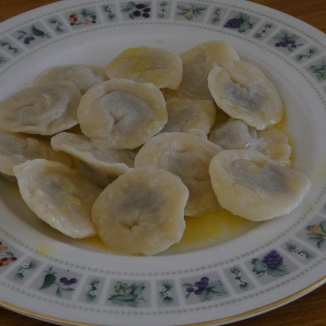 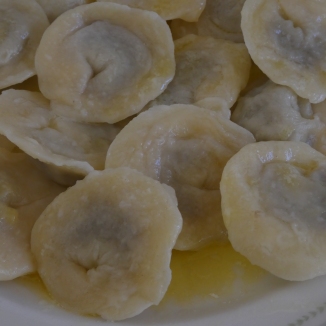 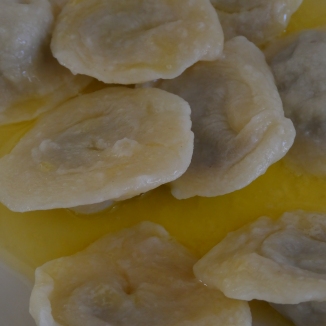 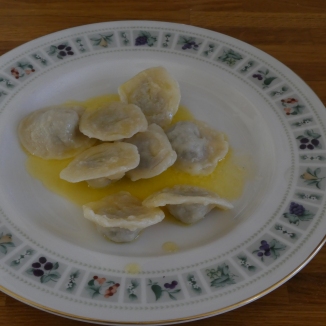 Any that are not eaten should be spread out so that they cool with the melted butter around them. 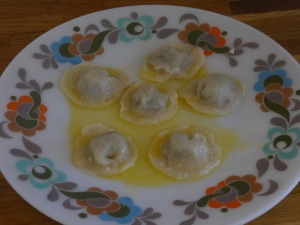 later, you can then fry them up gently so they are golden in parts.

A new tradition which was stared by my mother is on Christmas Day morning to have uszka fried with bacon and eggs, we always make sure we have some saved! 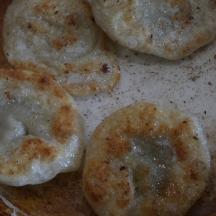 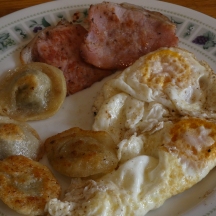 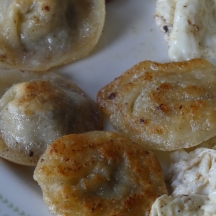 So much easier making the uszka in advance, so I will continue to make them like this, slowly over the weeks before Wigilia.