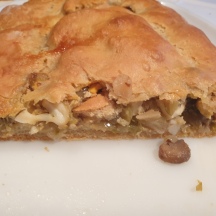 2 thoughts on “Kulebiak with Cabbage & Mushrooms”