Zupa cygańska is Gypsy soup and is so called  because it contains red peppers.  I think the smoky meats may also evoke the idea of camp fires. 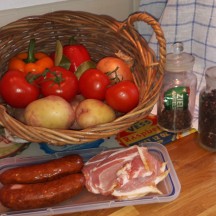 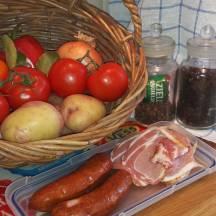 Do not let the potatoes disintegrate into a pulp. 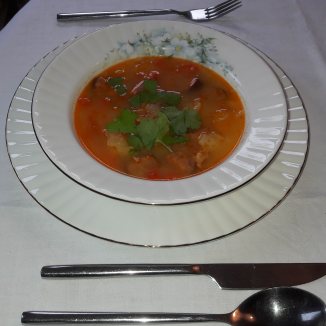 Served in Royal Stafford – Blossom Time from the 1950s.

If you do not have the fresh ingredients  you could use tinned tomatoes and bottled peppers.

There are many versions of tomato soup – some people just add tomato puree or a tin of tomatoes to rosół, (chicken bullion). For many this was standard practice on Monday with any that was left over from Sunday lunch and also in winter months in the past when fresh tomatoes were not so readily available.

I prefer to make a more refreshing fresh tomato soup.

Ripe tomatoes make the best soup – if you are lucky enough to have your own from the garden or allotment then these will be great or look out for ripe tomatoes on a market rather than the hard bullet ones often sold for salads.

Little note from the Metro newspaper

My mother always served boiled rice as the soup accompaniment.

Many years ago, well before Poland joined the European Union, when there were not as many Poles living in England, one of my English friends went for dinner at at a Polish lady’s house.  On telling me about the lovely food she said ” …. we had tomato soup with rice in it!” My instant reply without thinking was “but tomato soup always has rice in it”. 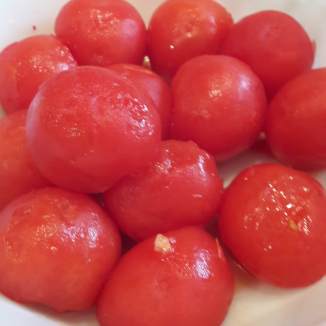 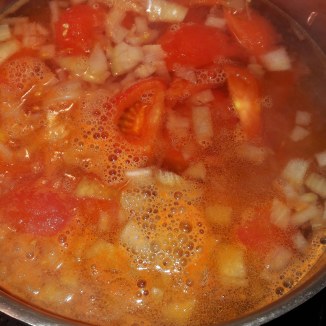 Although sour soups are popular in Poland – tomato soup does not want to be sour.  Depending on the tomatoes used, I sometimes add a little granulated sugar.

Several years ago after a large family gathering I had some gherkin and tomato salad left and decided to use this to make a soup. 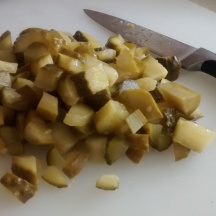 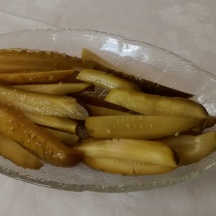 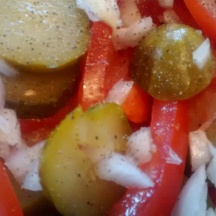 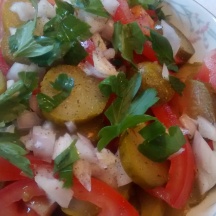 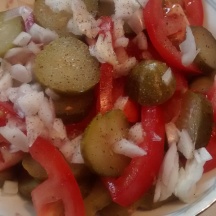 It was really delicious and I now often make this soup either from left over salad or create it from scratch.

It is one of those refreshing summer style soups with a touch of sourness as loved by the Poles. 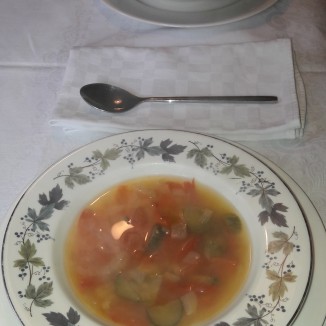 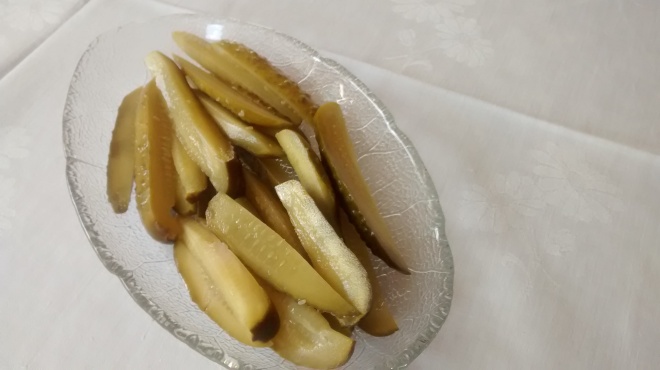 Gherkins are cucumbers that have been fermented in brine or pickled with vinegar.

Botanically cucumbers are fruit although they are a vegetables from the culinary point of view.

Kiszone ogórki  means  fermented cucumbers –  either in brine or vinegar.

The Latin name for the cucumber is Cucumis sativus and it is a member of the gourd family and so related to pumpkins and melons.

It is thought the plant originated in India and then was taken to Greece and from there to northern Europe.

I have read that the making of pickles by fermenting in brine is over 4,000 years old.  This would preserve vegetables throughout the winter – well before the days of frozen food and supermarkets!

A quick look at the journey of the word  – Gherkin – according to several dictionary sources.

This is a word that started in Greece and travelled to England & America via Poland, Germany and The Netherlands.

Augurk – Dutch for a brined or pickled cucumber

Gherkin  – English for a brined or pickled cucumber

In Poland, July & August  are the main months for making gherkins at home and once when I was there at that time in my relatives’ houses every container seemed to have been put into use for a stage in their production.

Everyone has their own special recipe using brine and sometimes vinegar with the addition of garlic and herbs and spices – the most often used is the flower head of the dill plant – hence we get dill pickles.  Some methods are very quick taking just a few days others take longer.

The type of cucumber used is a different variety than the salad cumber it is shorter, fatter, often knobbier and has a lower water content.

I cannot at the moment give you a good recipe for making gherkins as I have rarely seen the right variety of cucumbers for sale in England – maybe now with more Polish shops I might see some next year and try out some recipes.

The bought gherkins I like are the Polish Krakus ones. 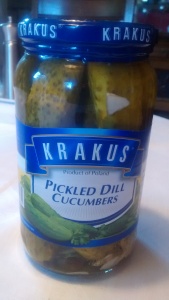 Another type I like are ones you can buy in Lidl – these are made with sugar and vinegar and are sliced lengthways – they have only a slight vinegar taste and are sweet – I do not like the very vinegary kind.

There are many uses of gherkins in Polish cookery – the most famous must be gherkin soup  – which I just love – but that recipe I will cover later once I start to write about soups.

Of course gherkins – form part of many salads.

4 or 5 Tomatoes- cut into half & then thinly sliced

Salt and pepper to taste.

In a bowl mix  together the gherkins, tomatoes and onions.

Sprinkle with a little salt and add 1 or 2 tablespoons of the liquid from the gherkin jar (if none is available then use some lemon juice) and mix again. 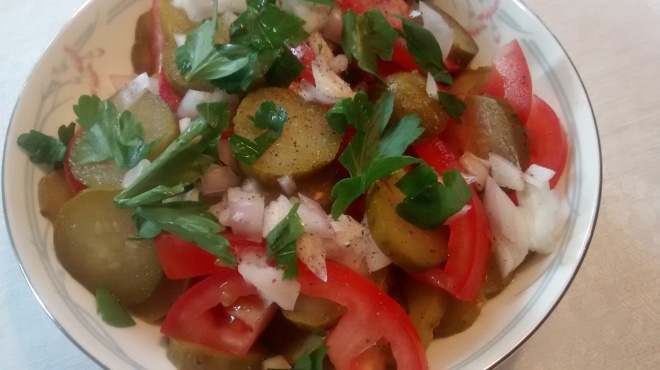 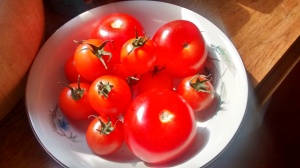 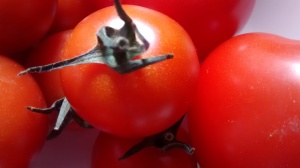 The  tomato is botanically the fruit of Solanum lycopersicum, although from a culinary point of view it is a vegetable.

It belongs to the deadly nightshade family as does the potato.

The tomato plant originated in the Andes in South America and tomatl was the name  in the Nahuatl language give to it by the Aztec people, which then became tomate and then tomato in English.

The tomato was brought over to Europe by the Conquistadors in the late 15th Century.

When the Italian princess, who became Queen Bona of Poland on her marriage to King Zygmunt the Old, came to Poland with her chefs in the 16th Century , the tomato was introduced to the Polish diet.

Tomato in Polish is pomidor – so you can see or rather hear its Italian root.

Home grown tomatoes are of course the best, however here in the North of England I have not had much success in growing them outdoors.

To get the best flavour from tomatoes it is best NOT to keep them in the refrigerator.

A simple tomato salad is served in Poland, always it seemed to me with the addition of onions, chives or the green part of spring onion.  For many it is standard fare for breakfast with cold meats or Polish curd cheese.

Tomatoes – thinly sliced into whole rounds if small or halved if large.

Half an onion – finely chopped  or

Chives or the green part of spring onions  – finely chopped

Salt and pepper to taste.

Arrange the tomato slices on a plate

Squeeze a little lemon juice over them

Sprinkle a little salt and pepper over them

Garnish with onion or chives